About The Zapp! English Team 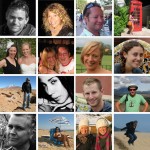 We’re a team of British and North American English teachers based in Oxford (UK) and Barcelona (Spain). Between us we’ve got many years’ English teaching experience in various countries around the world.

In recent years we’ve been focusing on teaching English through podcasting and audio, and have big plans for developing and releasing new digital English teaching materials in 2014, both here on Zappenglish.com and on our sister website (in Spanish), Ingles.fm.

If you’re interested in keeping up to date with new product releases (as well as receiving free materials) please enter your email address in the box on the right!

Now, here’s a bit more about us:

Katie’s two main passions in life are travel and teaching and she has been lucky enough to combine the two. A self- confessed nomad, she has spent the last 15 years exploring, as well as teaching.

She is a University of Cambridge CELTA and DELTA qualified teacher, as well as being a Cambridge University accredited Teacher Trainer for both face to face and online CELTA courses, and has trained around 500 teachers from every corner of the globe.

In her teaching career, she has taught students from beginner to proficiency, as well as teaching Business English, English for Tourism, Language and Culture, and Young Learners.

When she isn’t teaching or developing materials, Katie is to be found lusting after campervans.

Born in Oxford in England, Tom moved to London to go to university, where he studied, lived and worked for 12 years. Since 2003 he has spent most of his time living and working abroad; in Australia, Thailand (where he taught refugees from Burma both English and IT skills for 3 years) Latin America, and Spain.

He is a University of Cambridge CELTA qualified English teacher, web specialist, and keen podcaster and traveller.

Before moving to Spain he travelled from Guatemala to Argentina on buses learning Spanish along the way. In a previous life he was an underground techno DJ in London, but that’s a story for a future podcast :-).

Amanda’s a highly experienced and TEFL qualified English teacher and linguist, also born in the UK. She has lived, and taught English in Spain since 1995.

Before moving to Barcelona, she lived in Vigo (Galicia) in Northern Spain, where she also regularly worked as a radio producer, interpreter and interviewer for the America’s Cup, Barcelona World Race and Volvo Ocean Race.

In 2011 she spent time in Costa Rica where she developed her skills as a Yoga teacher, and is now living and teaching yoga & English in Barcelona, whilst also working as a Spanish/English interpreter & translator. Apart from Spanish and English, she’s also fluent in French!

Her new project is Essence Yoga in Barcelona.

Born in London, Mark remained there through his school and university years, graduating from Goldsmiths’ College (University of London). After graduating, Mark worked in various roles in the Telecommunications industry for 7 years until he decided it was time to escape London!

He went to live in Australia, and after 15 months returned to the UK and decided to finally realise one of his ambitions and move to Spain. He obtained a Trinity CertTESOL English teaching qualification in Sevilla in 2005, and moved to Barcelona soon after to work.

With more than 6 years’ experience teaching English to Spanish speakers on a daily basis, in various multinational companies, as well as preparing private students for official exams, Mark has invaluable experience in identifying, correcting and eliminating the mistakes that Spanish speakers make in English.

Originally from San Francisco, Eve has lived and travelled throughout the Americas and Europe. After attending high school in Boulder, Colorado, she studied psychology at the University of Pennsylvania and spent a semester in Buenos Aires, Argentina.

The following year she moved to Brazil on a Fulbright Fellowship, where she worked on a research project and organized theater and film activities with English language learners. Since 2010 she has been teaching English in Spain.

In her free time Eve enjoys photography and filmmaking. Last year she and Ben filmed a bilingual web series – www.pueblotheseries.com – about the adventures of an English teacher in rural Andalucía.

For Ben, the idea of being “abroad” is almost like being “home”. Something about the general confusion, adventures, and unique experiences of being in a foreign country never fail to inspire him.

Originally from Boulder, Colorado, he graduated from the University of Wisconsin-Madison in 2008 and since then has been living abroad in various places such as Argentina, Brazil and now, Spain. Last year Ben co-created the web series Pueblo with Eve and he is currently an English teacher in Barcelona.

Stuart was born in a small village in Nottinghamshire in the middle of England, and it was from there that he began his adventures. First at Leeds University (a true adventure!) and afterwards as a textiles engineer which took him all over Europe, cultivating his desire to travel and learn Spanish.

After briefly living in London, he left for South America hoping to travel around the entire continent, and 8 years later he said goodbye to Ecuador, his home during that time. He still wants to get know the beautiful continent of South America! There he began a volunteer program, teaching ecological agriculture (fbu.com.ec), and getting to know people from all over the wold, to whom he taught English. His passion for nature also encouraged him to begin a reforestation project for native forests (canopyco.org), which he’s continued running as a volunteer.

Now he lives in Barcelona, where, after doing his TEFL, he is focussed on giving Business English classes, and has begun his personal project to continue promoting ecological agriculture (huertoshop.com). He met Tom as they were neighbours!

We use cookies to ensure that we give you the best experience on our website. If you continue to use this site we will assume that you are happy with it.OK